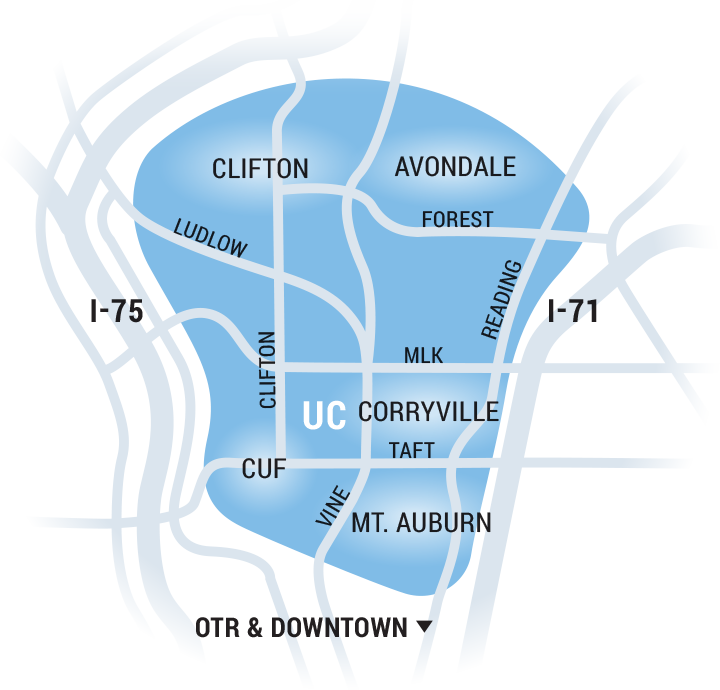 Uptown Cincinnati is a collection of neighborhoods located immediately north of downtown/OTR, between Interstate 71 and 75. The area boasts a mix of educational, regulatory and healthcare institutions, with a population that cuts across all social categories. This unique combination of economic and cultural diversity creates a one-of-a-kind community that’s reflected in the area’s many independent shops and international restaurants.

Beautiful, wide, tree-lined streets and a variety of sturdy brick houses accent Avondale, one of the oldest and most populous Cincinnati neighborhoods. Dating back to the 1830s, this vibrant community boasts a collection of Gothic Tudor homes decorated with original Rookwood tile. Avondale is also home to the world-famous Cincinnati Zoo and Botanical Garden, which hosts more than 1,000,000 visitors each year. Just minutes from downtown, Interstates 71 and 75, University of Cincinnati, and Xavier University, Avondale’s central location makes it an appealing community for urban living in Cincinnati, especially for families.

Fabled gaslights and historic homes give the village-like community of Clifton its unique charm. Accented by one-of-a-kind shops, trendy restaurants, and the city’s only surviving art house, the Esquire Theatre, the Ludlow Avenue business district is both historic and cosmopolitan. Once home to Cincinnati’s social elite, Clifton today is a Cincinnati neighborhood that features a diverse mix of families, professionals, educators, students, and artists.

Born from Cincinnati’s early incline system, which were used to take the streetcars up steep hills, the communities of Clifton Heights, University Heights, and Fairview are home to an eclectic, educated population abuzz with youthful energy. These Cincinnati neighborhoods are the perfect place to explore urban living in Cincinnati—as evidenced by the community’s large student population. As the University of Cincinnati has grown, many of the large, turn-of the-century brick and frame houses have been converted into rental properties.

Known for the Short Vine business district, Corryville is the place where University of Cincinnati students go for entertainment and shopping in Cincinnati. Its vibrant business district offers a wide variety of restaurants, specialty shops, banks, grocery stores, bars, and live music venues. Housing in this eclectic Cincinnati neighborhood includes turn-of-the-century brownstones and older brick and frame houses at affordable prices for urban living in Cincinnati.

Cincinnati’s first hilltop neighborhood, Mt. Auburn was originally home to wealthy Cincinnatians who wanted to escape the overcrowded conditions of the city. The Mt. Auburn Incline, which were used to take the streetcars up steep hills, opened this Cincinnati neighborhood to the middle class in 1872. Houses date from 1819 to the turn of the 20th century and reflect a variety of architectural styles. Mt. Auburn is where 27th President and 10th Chief Justice of The United States, William Howard Taft, was born and raised. His boyhood home in the Mt. Auburn Historic District, the William Howard Taft Historic Site is Cincinnati’s only National Park site.